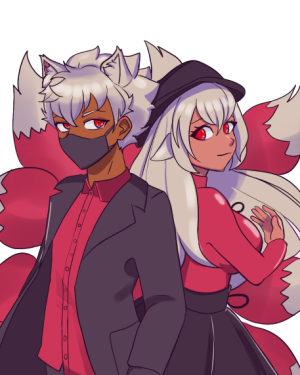 Akemi Hatsu is a Virtual Youtuber who makes content in English. He began streaming as a vtuber on April 8th, 2021. He generally streams a variety of content such as Rocket League, Grand Theft Auto, and NBA 2K. He is a part of the vtuber group HyperSonar. His streams can be mostly described as competitive and chaotic. When Akemi isn’t streaming, he’s usually playing Rocket League or working on videos for his YouTube channel.

Akemi Hatsu's birthday is September 24th. His sun sign is Libra and his moon sign is Taurus. Starting on June 2021, Akemi also began promoting a genderbent form of himself name Akemia.

Both Akemi and Akemia Hatsu are nine-tailed foxes. Their parents are unknown at this time. They go throughout their lives by streaming and supporting other vtubers.