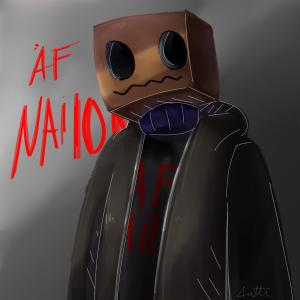 AF (yeah, that's a name) is a musician and producer, still learning to play piano and write music like a NORMAL person. He's made mainly of tar (from Callisto (Google it)), he also play videogames and do his homework in stream, and don't pat him, please don't, he'll probably stab you with the first thing he found and then he will melt and die, don't worry, he will wake up soon.

An strange fungus grows in a tar lake in Calisto, one of the moons of Jupiter, and then, AF borns, yea, weird, during the years he was a criminal, he stealed a cop's lolipop and escaped to earth. When he arrives to earth his face had been completly destroyed, he found a paperbag and now he uses it to let his face heal (now it's recovered), he was kidnapped in earth, like 7 times, and now he's looking for a home, living in a box it's no so great, you know.