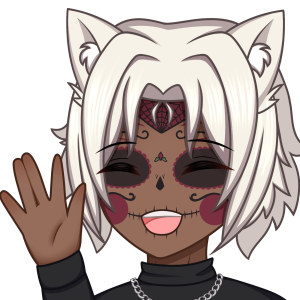 Aeon is a male VStreamer who focuses on FPS and Horror games, ranging from Apex Legends and Valorant to Dead by Daylight and Phasmophobia. His personality is chaotic, but has a very mature and sultry undertone when engaging in serious conversations with his community.

The three ruling families of Japan all worshipped separate members within the deity hierarchy: Agohige (Amaterasu Omikami), Munashi (Tsukyomi), and Same [pronounced "sah-meh"] (Susanoo). The Agohige and Munashi families led Japan in close proximity, w/ the Munashi family living in the Agohige shadow... just as the moon fleets when morning comes. The Same family was more of the rugged fashion, yet controlled the ports & navy under the blessing of Susanoo.

Aeon and his sister Hoshi were born to Reonidasu & Osori Agohige, and he was being groomed to reign over Japan as soon as he could walk. Under the adoring supervision of Amaterasu, Aeon was raised as both a leader and as a warrior; he was lethal with most conventional weaponry by the age of 12, and was an exceptional scholar. Aeon also had an ungodly appetite - as a child, his birthday feasts would be equal to that of the Same naval fleet banquets.

Hoshi was just as aggressive as her younger brother, and quickly rose through the ranks of the Crimson Guard, the Agohige family's personal military. She was strong, and Aeon looked up to her in every way, despite Reonidasu's plans for him.

All seemed well... until it wasn't.

Negai Munashi, the patriarch of the Munashi family, grew quite tired of living in the shadow of Reonidasu. In an attempt to snatch the throne of Japan, Negai signed a pact w/ Tsukyomi to open the gates to the Land of the Dead - unleashing a horde of demons upon Gisei, the fortress kingdom where the Agohige family lived and prospered. The brutal ambush happened overnight, and the last images in Aeon's mind were that of his father, fighting off waves of the undead as he and Hoshi attempted to protect the gates for Aeon and Osori to be able to escape. As they ran from the burning castle they were stopped in the middle of the road by Yoru Munashi, wife of Negai & sworn Agohige enemy, as she herself was once a member of their household who attempted to steal Reonidasu's heart. Lunging for Osori's neck, Aeon blocks the attack & is mortally wounded in the process - now housing a gaping hole in his ribcage.

Struggling to get back to his feet, Yoru makes Aeon watch as his mother is slain, seconds before kicking him off of the ledge. As he falls he sheds one solitary tear, his mind plagued by all of those he failed to save.

When he awakes, he is now in the mortal realm - however, he is all alone.

He is then greeted by Lady Amaterasu herself, and is then given an opportunity to avenge his family. He readily accepts. As she puts him into a deep slumber, his life as a demi-god is about to begin...