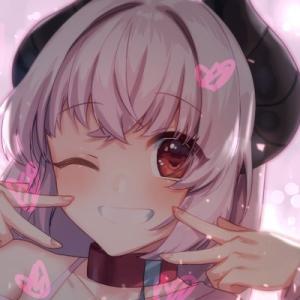 Abizu Akira is a female, english-speaking Vtuber. She streams and creates a variety of content, including but not limited to gaming, chatting and memes.

After Akira started streaming on October 8th, 2020, she assumed a chaotic but loveable personality. Her streams are punctuated with interactions between herself and her viewers via the use of sound alerts and Text To Speech commands, the chat having taken a liking in teasing her with loud noises and weird statements.

Her model was drawn and rigged by ZenNiibi2 who is refered to as "Mom" on during her streams.

Akira is a curious demon girl who one day decided to take a trip to earth. Unfortunately, when stepping out of the portal she fell on her head and lost all of her memories of her homeland and of being a demon. Since then, she developed an interest in computers and spends her time as a delivery girl during the day and a streamer at night. Completely losing her interest in recovering her memory.